The Use of Producer Gas in the Chemical Industries

This article was originally published in Electrochemical and Metallurgical Industry Publication of September 1907. Information within this article is therefore correct as of 1907. The publication of this material aims to provide historical insight on the subject and its place in industry.

In Germany great progress has been made lately in the application of producer gas for melting, calcining, roasting, heating with reducing or oxidizing flame and evaporating. A large number of sulphate furnaces are now operating with producer gas and the total saving of labor and fuel in most of them amounts up to 50%. The general advantages of producer firing are:

a. By regulating the quantity of gas and air conveyed to the place of combustion a perfect and uniform combustion is obtained.

b. According to requirements an oxidizing or reducing flame can be obtained, which is of importance to the chemical and metallurgical industries.

c. The process of combustion can be limited to a small place, whereby the effect to be attained is frequently reached better and quicker than with direct firing.

d. It is possible in every case to utilize perfectly the waste heat by preheating the combustion air or the gas.

e. The material to be burned or worked does not come in contact with the solid fuel or ashes, which is of importance for the manufacture of lime and of clay products.

f. The attendance is easier, is simpler and cheaper than with direct firing.

g. The places of the gas production and gas consumption can be separated; thence one producer or a battery of producers can furnish fuel to a large number of furnaces. A long distance of producer and furnace is rather an advantage, as it causes the complete condensation of steam in the producer gas.

The special advantages of importance to sulphate works and other chemical factories are :

a. The possibility of burning low-grade fuel.

b. Production of a uniform product on account of the regularity of the temperature.

The principal outlines of a gas-fired reverberation furnace are shown in Fig. 1. The change from direct fire to gas fire consists mainly in the addition of the gas producer and recuperator between furnace and chimney. The recuperator consists mainly of a system of fire-clay pipes (e 1) which connect the flue b with the chimney (F). This pipe system is built into a wider channel (L) in which the air required for the combustion of the producer gas is introduced. The air goes in channel (L) around the pipe system, as shown in the cut by arrows, absorbs the heat of the escaping fire gases; this heat travels back to the furnace through the channels and openings (i). These channels are connected with the hot air chamber (L) of the recuperator by air slits or air channels. In these air slits which are arranged throughout the width of the furnace arch the air is brought to a still higher temperature. Thence at the fire bridge incandescent producer gas is mixed with incandescent air, causing a perfect combustion. In working with a reducing flame the combustion is nearly smokeless. It gets perfectly smokeless by the use of a slight excess of air. The saving is effected by the higher temperature obtained, by the recovery of the heat in the recuperator, by reducing the radiation of the fire-place, by the exact regularity of the firing, by the perfect combustion and by the longer life of the fire-brick.

As lime is largely used in the chemical industries a description of a producer-fired gas lime kiln, as shown in Fig. 2 will be of interest. 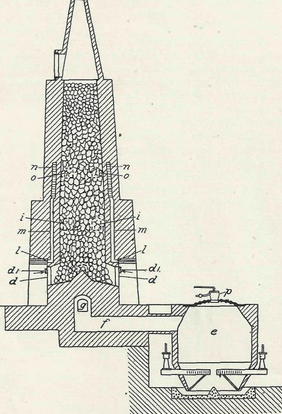 The gas generated in the producer goes through sewer (f) to the gas distributing flue (g), from which the gas passes through vertical channels to the gas inlet openings (i). Being under pressure the gas is equally distributed over the entire area. The combustion air enters at (d), absorbs the heat stored in the lower part of the shaft and is highly preheated while the burned material in the furnace is cooled at the same time. The air arrives (on account of the high temperature) at the place of combustion at a certain pressure, which prevents the drawing in of excess air and affects the uniform distribution of the air as well as of the gas. The combustion of the producer gas by the hot air is taking place between and above the gas inlets. That part of the producer gas which rises upward immediately at the inlet openings does not meet the amount of air necessary for combustion, which, however, is introduced above the gas inlet through the air inlets (o). This "second" combustion air enters the shaft, rises through (m), is distributed in the channels (m & n) behind the fire-brick lining of the combustion zone proper and finally enters the shaft through openings (c). By means of this arrangement the fire-brick lining is air cooled from the outside and the rising producer gas completely burned by the second combustion air.

It is evident that with such a producer-gas installation a uniform heat is obtained, that the utilization of the heat is far superior to direct fire, and that a great saving in the fuel consumption (25 to 50%) is effected. Further advantages are the production of pure material and longer life of the shaft. A producer especially adapted for this kind of work is the Herrick producer, which is manufactured by the Industrial Gas Co of New York. It is shown in the cuts connected to a reverberatory furnace and lime kiln. It is of the water seal type, and the special construction of its tuyeres insures the uniform distribution of the blast, thereby effecting the formation of gas of constant composition.

The way of mixing the gas and the air is of fundamental importance for getting a complete and smokeless combustion. In a wide hearth the gas will advantageously be introduced in a number of parallel currents. In this case the air has to be applied analogously, so that there is one gas channel corresponding to every air channel. As the air is heavier than the gas, it is by no means immaterial whether the air channels are constructed above or below the gas channels. If the air is introduced above the gas a quicker combustion is obtained; reduction processes are conveniently performed with "upper" air. If the air is introduced below the gas a slower combustion i.e a longer flame, is obtained; oxidation processes are conveniently performed with "lower" air. While parallel currents of gas and air are used if a large area is to be heated, the gas and air are brought together under an angle for heating a narrow space; for heating a small object gas and air are combined at a right angle.

Do you have used machinery for sale?

Over 8,000 sellers have listed their surplus equipment with us since 2006.

Selling with Kitmondo is free, efficient and fast.

What You Should Know About Purchasing Used Heavy Trucks

As a manufacturer or manager of industrial activities, you will at one point or the other…